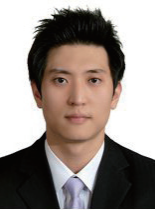 The award of Minister of Culture, Sports and Tourism
• Best Staff of the year(2011)
The award of President of Chung Ang University
• For an excellent academic achievement(2006)